QIFF 2016 activities and events were announced this morning at a press conference at the Museum of Islamic Art. The 7th edition looks set to be the biggest year as activities have been extended to The Pearl-Qatar and Katara Cultural Village.

Food trucks from Qatar and around the region will feature in the 7th Qatar International Food Festival (QIFF), adding a new urban feel to the long-awaited annual event, organisers have revealed. The 12 food trucks will feature at the QIFF satellite experience in The Pearl-Qatar, which joins Katara Cultural Village as one of the Festival’s new locations this year. Although details have not yet been revealed about the food trucks, expect Burgeri’s Big Yellow Truck to be a big feature.

Make sure you keep an eye on opening times as the timings will be different on the first day. Make sure you read the for information about parking and transport arrangements.

Please be aware of the last timings for the water shuttle at 9.15pm.

Please be aware of the last timings for the water shuttle at 9.15pm

For full coverage about QIFF 2016 check out the following Features:

QIFF 2016 Expands to The Pearl and Katara for 7 day Qatar Food Festival!

Healthy Eating at QIFF 2016 with Qatar Museums and Alain Ducasse!

QIFF 2016 is also being showcased as a perfect event for a short break as a way to encourage increased regional tourism from neighbouring countries. There was some emphasis placed by Mr Ehab Amin, Senior VP for Qatar Airways on their “special festival travel packages designed to tempt visitors with a quick getaway.”

Festival participants can also look forward to the return of the popular A Taste of Business Class (Dinner in the Sky) by Qatar Airways. Additionally, QIFF will offer new entertainment experiences this year, designed for the whole family. Singers, as well as regional and international music bands, will take part in the festival’s entertainment shows, which can be attended free of charge by all visitors. A daily fireworks display will take place throughout the festival.

The Live Cooking Theatre will also be back with Qatar Airways stalwarts Vineet Bhatia and Massimo Capra. But there will be some new faces including the internationally renowned Martha Stewart and George Calombaris, the judge from Australia Masterchef who is currently at the Dubai Food Festival.

The success of last year’s festival encouraged the QTA to expand the area covered and increase the variety of food offerings. There is also some importance on the relationship with Qatar Airways, and new partners Katara Cultural Village and UDC. The key points emphasised at the press conference seemed to relate to increasing the visitor experiences in a unique way with cultural and urban settings.

Instead of zones there will be courts this year, which we like to think has been inspired by Far Eastern culture as a celebration of Qatar-China 2016 Year of Culture.

In addition to new locations, QIFF will have new hours this year, extending its opening times from 9.30 am to 1.00 pm for school visits held in coordination with the Ministry of Education and Higher Education. The festival will open to the public between 1.00 pm and 10.30 pm.

Organizers have also ensured entertainment for all members of the family, with a Youth Court that will host live stage performances by Baraem TV in the MIA Park, as well as a new initiative by Qatar Museums aimed at fostering healthy eating.

The InstaMarket will be back with kiosks from top Qatar-based entrepreneurs who are active on Instagram, preparing dishes live in front of visitors.

There was some good news about the different food offerings with an increased focus on cheaper priced snacks ranging from QR5 to QR35 at the Snack Court which will feature popular eateries, cafes and restaurants.

The Cuisine Court will include fine-dining creations by chefs from the country’s hotels, at prices ranging between 5-35 QAR, as well as High Tea by the Bay.

The High Tea in the Bay area, catered by Katara Hospitality, includes a double-deck tent with a shaded terrace, stunning views of the entire festival, as well as, English, Chinese and Arabic tea on offer throughout the Festival.

The Culture Court will celebrate  Qatar-China 2016 Year of Culture with a focus on Chinese and Qatari cuisine. A new area dubbed The Market Court will be introduced which will showcase local foods including tea and visitors will also be able to purchase ingredients.

The returning Water Court will include festival favourites, Barbeque on the Bay by the Diplomatic Club and Dinner on a Dhow by Souq Waqif Boutique Hotels. Healthy Eating will again be a focus at QIFF 2016, with a Health Court. There will be organic food and access to stations where visitors can receive medical checks, and advice about healthy living. School activities have already begun educating children about the importance of fruit and vegetables and the message of healthy eating is being enforced by key partners.

Qatar Museums will also be launching the Healthy Food Initiative – a programme of activities designed to increase awareness about leading a healthier lifestyle and to promote healthy eating.

The success of last year’s festival encouraged the QTA to expand the area covered and increase the variety of food offerings. There is also some importance on the relationship with Qatar Airways, and new partners Katara Cultural Village and UDC. The key points emphasised at the press conference seemed to relate to increasing the visitor experiences in a unique way with cultural and urban settings

This year’s Festival will have a presence in Katara Cultural Village, with a cooking theatre and an entertainment zone planned in the Village’s beach area.

QIFF has been welcomed by Katara’s General Manager, H.E. Dr. Khalid Ibrahim Al Sulaiti, as a way of recognising the importance of food cultures and civilisations: “We are confident that the combination of the Festival’s diverse events and forms of entertainment with Katara’s wide range of international restaurants and cafes, against their authentic architectural backdrop, will enrich this year’s QIFF and give its success, which has been building up for so many years, a new dimension.”

Water taxis will be available to transport visitors between the different locations. In addition, the returning Water Court will include festival favourites, Barbeque on the Bay by the Diplomatic Club and Dinner on a Dhow by Souq Waqif Boutique Hotels. For residents of The Pearl there is some excellent news with offshoot events planned for Lido Venezia Beach at Qanat Quartier, as food trucks head to Doha. Home-grown burger brand Burgeri will be representing Qatar, but expect many non-local brands. In a move that echoes many other international food festivals the QTA is recognising the enormity of the worldwide food truck phenomena which has been increasing exponentially across the world. Looks like Qatar Food Festival 2016 is going to be bigger and better this year. More details will be released in a few weeks with regards to the social media influencers expected, the food trucks and the competitions to be held by the QTA. 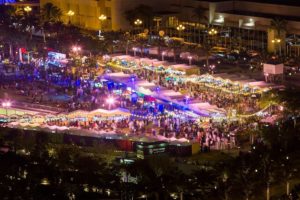